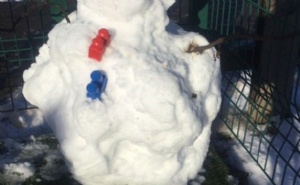 Gold class enjoyed their time on Monday playing in the snow and making a snow person!  Pupils took it in turns to roll the snow into a large ball, this became heavy at the end and required adult help.  Gold class pupils decided to put their snow person at the entrance of the school to welcome people to Willoughby.  The pupils decided what to use as eyes, buttons and a hat. Later, the class had a vote to name their snow person, they decided on Sparkle.